During the Buddhist Lent, it is customary for senior monks and newly ordained monks to be present together and dwell at the same temple. This is also a propitious time for faithful temple supporters as well. Since ancient time, venerable monks would not go into Buddhist Lent alone, but would be accompanied by the supporters who would commit to their own Lent as well. However, the laypeople’s Lent is carried out by making ‘resolutions.’

The three key moral principles in Buddhism are:

When venerable monks enter Lent, they have the responsibility to continue their cultivation of these three moral principles. However, abstention from bad deeds for monks does not merely mean to only refrain from coarse forms of unwholesome deeds, but to eliminate defilements altogether. Defilements, through the eyes of the outside world, may not necessarily be perceived as bad or terrible things. For example, when a monk is distracted, it is a distraction arising in his mind and not something that others can see. Even if that were the case, he will strive to remove the distraction by persevering in the practice of meditation. He will endeavor to eliminate the defilements, or the refined unwholesome deeds, in a manner that is proper for a monk.

The phrase “to perform wholesome deeds” for monks means the continued effort to perform ever more virtuous deeds. For instance, now that they’re residing together at the same temple, the senior monks should teach and mentor the new monks; and the new monks should concentrate on studying to increase more Dhamma knowledge and virtues within themselves, while continuing to purify their mind. They should persist in their effort to rise at dawn to perform the morning chanting and meditate.

Since ancient time, when the first day of the Buddhist Lent arrives, most Buddhists would take the opportunity to make their own resolutions to cease doing bad deeds, coarse or refined. The laypeople will try to mirror the good examples of the monks as much as possible. They may resolve that ‘during the three months of Lent, I will try to rectify the bad habits that I have (choose at least one).’ In another example, those who used to drink may declare, “During this Lent, I resolve to quit drinking alcohol entirely.” For others, it may be a resolve to stop smoking during the Buddhist Lent. During Lent, Buddhists will resolve to abstain from bad deeds and to perform ever more wholesome deeds.

As for deeds that are wholesome, we will try to perform increasingly more of. For instance, prior to the start of Lent, if we offered only occasionally - mainly on Saturdays, Sundays, days before or days of the Buddhist observant day, or days when we have an opportunity; and wouldn’t make any effort on days when we were lazy. We can resolve to offer alms to monks every morning for the entire three months of Lent since they are available to receive these alms.

For some, they may raise the bar for themselves. For instance, if they normally observed the Five Precepts, they might resolve to observe the Eight Precepts during Lent; if they previously only observed the Eight Precepts on Buddhist observant days, they will make it twice a week. While for some, they intend to observe the Eight Precepts for the entire three months of Lent. The terms of the resolutions varied according to the strength of one’s faith. Many take it even further by resolving: “In addition to observing the Eight Precepts, I will practice meditation every day or every evening for one hour, or two hours, or three hours, respectively.” These are the things that our ancestors consistently practiced in the past. 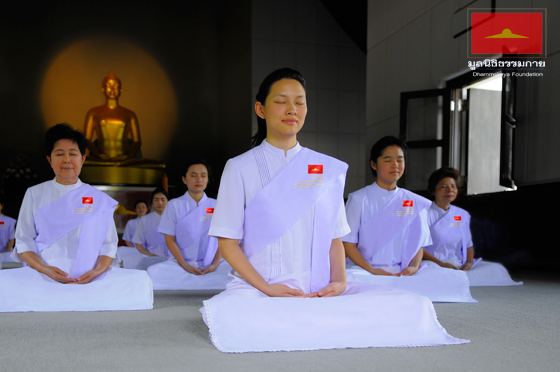 During Lent, Buddhists will resolve to abstain from bad deeds and to perform ever more wholesome deeds.

I would also like everyone to keep in mind the fact that our current society has changed and most people normally have Saturday and Sunday as their days off. Traditionally, venerable monks gave sermons on Buddhist observant days; thus, the elderlies were the remaining group of people available to listen to these sermons. Therefore, this Lent, I would like to appeal to all the most venerable and venerable monks that it would be beneficial to include Saturdays and Sundays for your sermons since most people are off those days. As for the people, since we are now aware of the additional days available to listen to Dhamma sermons, please make sure to encourage others to come as well. If we are diligent like this, we will gain great merits during the entire Lent, and help bring benefits and prosperity to all the venerable monks, ourselves, and the whole country throughout this year and the years to come.