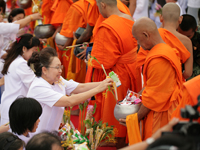 Offering Flowers to Start the Buddhist Lent in Thailand

CNN PRODUCER NOTE Amy072 had the opportunity to photograph the start of Buddhist Lent in Saraburi province, Thailand. Buddhist Lent, otherwise known as Khao Phansa in Thai, takes place for three lunar cycles and it is a time where monks stay in the temples and meditate intensely, she says. She says a highlight of the event is seeing people offer flowers as alms.

But she learned later on that monk dean of Saraburi, Phradej Phrakhun Phradhammapiduk, encouraged people to also give nonperishable goods so that they can be given to those who were suffering from hardship in other provinces in Thailand. She says during the ceremony, people offered a specific flower for alms known as the Dancing Lady Ginger, which she says is native to Thailand and Vietnam. - Jareen, CNN iReport producer (Read More) 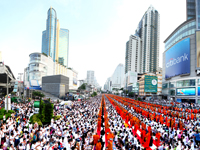 CNN PRODUCER NOTE skynoi of Pathum Thani, Thailand, documents more than 12,000 Buddhist monks receiving alms in preparation for a three-month period known as Buddhist Lent. "The monks will use this period to rest and practice the teachings of the Lord Buddha," says skynoi. The photographs were captured on July 7. - stein0726, CNN iReport producer (Read More)

CNN PRODUCER NOTE Standing on top of a hotel balcony, Amy072 says she had an amazing view of the Alms Offering Ceremony in Bangkok on July 7. The ceremony was held to mark the 2,600th anniversary of the enlightenment of Buddha. "The line of monks seemed never ending and it was nice to see robes of different colors such as bright orange, deep orange, brown, or maroon to represent the different types of Buddhism and where the monks are from," she says. "Everyone was very happy. Thailand is known as "the land of smiles" and smiling faces were everywhere!" - Anika3, CNN iReport producer (Read More) 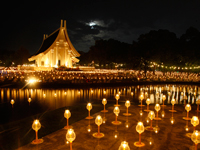 Lighting of Peace on Vesak Day In Thailand

CNN PRODUCER NOTE Amy072, who was born and raised in California, recently graduated college and traveled to Thailand to learn about her parents' background and the Thai culture. She and her cameraman shot this story on June 4 at the Wat Phra Dhammakaya temple in Pathum Thani. They previously reported on an Earth Day event at the same location. - dsashin, CNN iReport producer (Read More)

CNN PRODUCER NOTE Onoohoi says in Mongolia people celebrate Vesak Day by lighting lanterns, which show respect to Buddha. Onoohoi says monks chant and bless everyone in the world and people who attend the event not only light lanterns, but pray for happiness and health. 'I would like to share happiness with everyone no matter what their religion is so that we can take one step closer to world peace, and I wanted to share these images of our beautiful country,' Onoohoi says. - Jareen, CNN iReport producer (Read More)

CNN PRODUCER NOTE Onoohoi of Mongolia shares photos of Vesak, a Buddhist festival commemorating the birthday, enlightenment and death of Gautama Buddha. Onoohoi says the celebration consists of storytelling, prayer and meditation. "After finishing meditation, they start to light the ground lanterns to pay homage to Lord Buddha. We give resolutions and then we start to float the lanterns to the sky." The photos were captured at the National Stadium of Mongolia on June 4, 2012. - stein0726, CNN iReport producer (Read More)

CNN PRODUCER NOTE Onoohoi of Mongolia shares this visually remarkable video of Vesak, a Buddhist festival commemorating the birthday, enlightenment and death of Gautama Buddha. She says the celebration consists of storytelling, prayer and meditation. "I hope everyone will experience this happiness, just like how we did today." The video was documented at the National Stadium of Mongolia on June 4, 2012. Visit Onoohoi's iReport page to see photos of the celebration. - stein0726, CNN iReport producer (Read More) 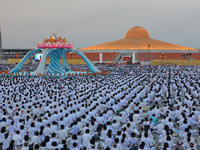 Over Thousands Gather to Meditate to "Clean the World, Clean our Minds" on Earth Day

CNN PRODUCER NOTE Amy072, of Pathum, Thailand, and her cameraman, Pok Hattapol, shot these pictures of thousands gathered at The Dhammakaya Foundation in honor of Earth Day on Sunday, April 22. 'Earth Day is a day for promoting environmental awareness,' she says. 'For Wat Phra Dhammakaya to organize an event on Earth Day for people and Buddhist monks from all over Thailand and other countries in the world to come together and meditate is something that can really make this world a better place.' She says this event occurs every year on Earth Day at the foundation, however, the casting of the golden image of Phramongkolthepmuni does not. 'Meditation is the key for purifying your mind, a purified mind will create inner peace and inner happiness, in turn it will eventually lead to outer peace to make this world a better place,' she says. 'I believe that we shouldn't only focus on environmental awareness, but also focus on spiritual awareness.' - ssesha, CNN iReport producer (Read More) 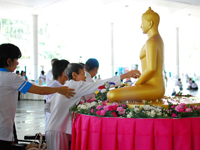 CNN PRODUCER NOTE skynoi says one of the highlights of the Thai New Year is seeing the Songkran festival. During the festival, sand pagodas are created, and images of Buddha's are hung from everywhere. Skynoi says the Songkran festival is related to water, and the people of Thailand believe that splashing water will bring rainfall and that water is a symbol of fertility and cleanses call bad things. - Jareen, CNN iReport producer (Read More) 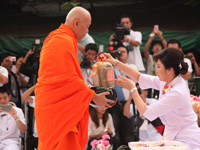 CNN PRODUCER NOTE Amy072 shared these photos and video of tens of thousands of Buddhists massing in the streets of Bangkok, Thailand, for an almsgiving ceremony to raise money for victims of last year's flooding. 'Everyone that came out that day was amazed at the beauty and at the kindness that was taking place,' she said. 'There were many foreigners who joined in this event as well. In short, the scene was magical.' - jmsaba, CNN iReport producer (Read More) 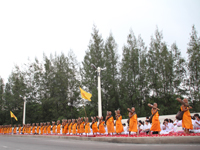 The Rose Way of 1,500 Monks and Novices Through Bangkok, Thailand

CNN PRODUCER NOTE Amy072 shot these pictures of monks on a 5-day, 59-kilometer (37-mile) pilgrimage through Bangkok, Thailand, on rose petals. 'Roses are the symbol of love, so we pave rose petals for these monks to show love for Buddhism and love for the peace and serenity that they bring,' she explains. 'A pilgrimage of this many monks into a very busy city is very hard for it to happen. But Thailand is the place that can make the impossible happen. Once it happened, many people both Thais and foreigners were able to witness this historic event.' She says this is the first time such a pilgrimage has taken place in Thailand. - ssesha, CNN iReport producer (Read More)

Reflections of The Rose Way Pilgrimage in Bangkok, Thailand

CNN PRODUCER NOTE My parents are both Thai, but I was born and raised in California. After 22 years, I wanted change. So I decided to come to Thailand to see what my parents' hometown holds. Being in Thailand for the past 3 months, gave me many opportunities to learn about Thai culture and also Buddism. The most recent event that I was able to witness was the pilgrimage of 1,500 monks walking on rose petals through the busy city of Bangkok, Thailand. This, like I said, is something that has never happened before. (Read More) 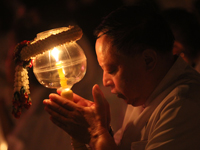 Meditation and Lighting The Lanterns

CNN PRODUCER NOTE Ittipon072 of Thailand's Dhammakaya Foundation shared these photos and video from a Buddhist meditation and lantern-lighting ceremony at Phra Dhammakaya Temple in Pathum Thani. 'It was as if you were standing in the middle of the sea but it is the golden sea of candlelight,' he said. 'The sky tonight was filled with the light lit by 100,000 people coming from all over Thailand who came to meditate and light up the bright flames to show the power of peace brought by meditation.' - jmsaba, CNN iReport producer (Read More) 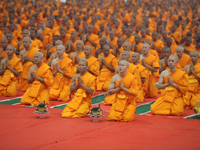 Dhammadayada Monks from All Villages across Thailand

CNN PRODUCER NOTE skynoi says hundreds of monks in every village across Thailand joined in on the ceremony. He says the ceremony starts early in the morning and monks and those being ordained pay homage to the pagoda. He says the ordination in Buddhism is part of a moral learning, training the mind and body the teachings of Buddha. - Jareen, CNN iReport producer (Read More)

CNN PRODUCER NOTE skynoi sends us this iReport from the Phra Dhammakaya Temple, in the Pathum Thani province of Thailand. Last Saturday, January 28, he was witness to one million Thai children meditate and participate 'in moral activities together' at the 'V-star Change the world' event. - elchueco, CNN iReport producer (Read More)